One of the greatest challenges naturism faces are the constant accusations of sexual misconduct thrown at it by conservative and liberal alike. As a very small but visible minority, naturists are viewed as choice prey by demagogues of every stripe. It is incumbent on the naturist community to police their own ranks vigilantly, to remove targets of opportunity for outsiders to attack.

Naturist art as wish fulfillment? So very few of those who feel the naturist urge actually have or take the opportunity to experience the joy of feeling the open air on their naked body in the company of like-minded and equally nude folk. For these people, art can be both a substitute for that experience and a reminder that the reality of their dream is indeed out there if they can reach it.

Not all art is an attempt to realistically and accurately depict reality as the artist experienced it. Sometimes art is an attempt to capture a feeling, such as this work by artist Edvard Munch, “Bathers on Rocks”. The figures are indistinct, so much so that it can be hard to discern even gender. And really, does it matter? Isn’t it enough to hear the waves, smell the ocean spray, and feel the sea breeze on your naked body?

“Conversation In A Beach Chair” by Rudolf Voigt

Beach scenes tend to be a favorite topic for naturist artists since that is often the best and most natural place to find mixed-gender, non-sexual, social nudity. And who doesn’t love the beach?

“Evening at the beach” by Anthony Tewfik (http://www.anthony-tewfik.com).  With families mingling in their natural state in nature, it shows a time and place far too many can only dream of. 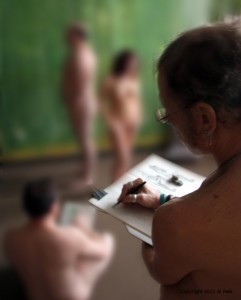