Born in Nantes, France in 1882, Georges Barbier had his first exhibition of Art Deco paintings in 1911 at age 29. As a result of the popularity of his work he was later asked to design a wide variety of things, including theatres and ballet costumes and the prestigious ‘Folies Bergere.’ He also worked in other media, such as glass and even wallpaper design, and remained popular until he died at the top of his career in 1932.

Nudism and Art Deco have been kindred cousins since their inception. Nudity figures prominently in Art Deco design, particularly through the 1920s, just as the first established nudist colonies were opened. It wasn’t called ‘The Roaring 20s’ for nothing. Barbier’s work is simple and well executed. And simplicity is what nudists want in their lives. Just to come home, remove the clothes and relax. Live a simple life with no worries. Just like everybody else. The only difference is nudists do it without clothes. Otherwise, everybody is the same.

If you have any comments or wish to contribute art or commentary, please reach us artdayonline@gmail.com. 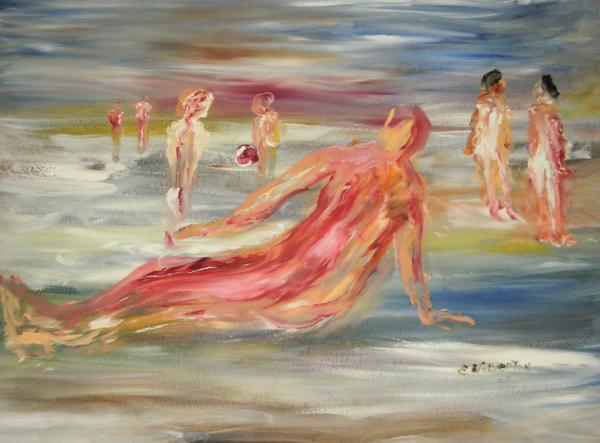 Born in San Jose, California in October 1952, Edward Wolverton is a contemporary surrealist painter who still lives in Silicon Valley. He had worked as a machinist until heart trouble caused him to retire in 2004, whereupon he was able to devote all his time to his craft. He has published 20 books about art, three on photography and 12 books of poetry and has painted more than 4000 pieces using a variety of media, styles (that all hearken back to surrealism) and subject matter.

Today’s painting, ‘The Nude Beach,’ is full of colour and flow. It calls to mind the brilliant summer days that are at a premium now that it’s Labour Day weekend. Since not everyone at a nude beach is actually nude (there are some people who are still coming to grips with being nude in public, even if they’ve lived the lifestyle for years in private and with friends and family), there is still a wide range of colours to be seen and Wolverton’s painting brings that out vibrantly. There are still some vibrant and brilliant days ahead before the weather forces us back indoors, so it would be a great time to take this last holiday weekend of the summer and get out to a nude beach if there is one close to you and absorb some of the last rays of the hottest summer on record around the world.

If you have any comments or wish to contribute art or commentary, please reach us artdayonline@gmail.com. 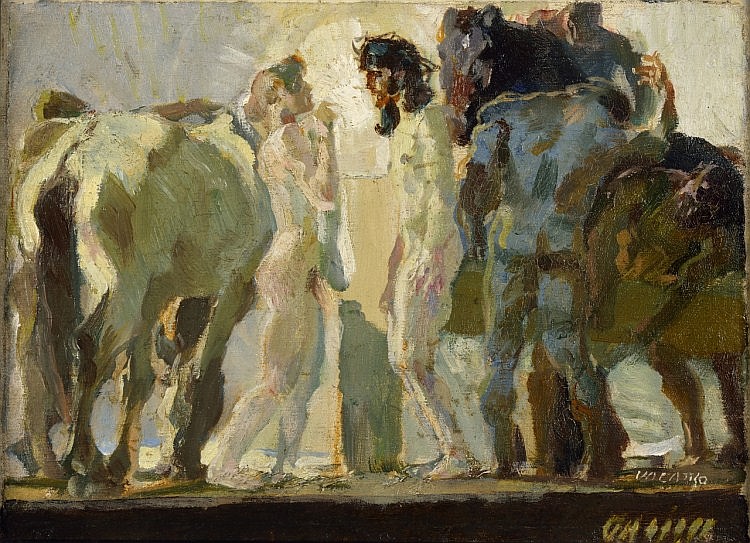 Ludvík Vacátko (1873-1956) was born in Vienna, Austria and was a painter and sculptor. Today’s image, ‘St. Veronica and Christ’ is, for obvious reasons, controversial. St. Veronica was a First Century woman who, when moved by Christ’s ordeal as he carried the cross, reportedly gave him her veil to wipe his forehead. Tradition has it that his face then appeared on the veil and she was given a feast day on 12 July. A 2013 New Yorker article has this to say about Christ and nudity: ‘A credo of the Franciscan order was nudus nudum Christum sequi (“follow naked the naked Christ”). It was a radical call to cast aside worldly wealth and belongings and acknowledge the fragile, fallen nature of all men and women. But in casting aside Christ’s garments, the Franciscans made Christ’s nude body a focal point.’ As the order came to power around 1260, the Franciscans made Christ’s nakedness a focal point, believing that emphasising his naked body also emphasises his humanity and compassion and joining it to human sexuality.

Vacátko came to painting via a circuitous route. His parents chose the profession of military officer for him and sent him off to military school, but he became an artist and art professor after his time in the military at the cadet school he attended. He then continued his art studies in Paris, Vienna and Munich. He became an expert in animal physiology and much of his work features horses. His book, ‘Animal Painting,’ was published in 1928.

Lady Godiva, wife of Leofric, the Earl of Mercer and Lord of Coventry, comes to mind because of her famous and infamous nude ride through the streets of her town after her husband levied massive taxes on the people. In 1057, the legend says, she pleaded with her husband to lower the taxes, but he countered by saying that if she would ride naked through the streets he would comply. She ordered all the residents to shutter their windows and not to look. She did and he relented. Only one person couldn’t resist looking and, yes, his name was Tom and it’s where we get the term ‘Peeping Tom’.

Now, riding nude on horseback sounds like a great way to commune with nature – especially in woods or forest – where you can naturally mingle with both flora and fauna. It seems like a great idea. If you have a saddle it’s one thing, but if you prefer riding bareback with only a horse blanket between your skin and a horse’s coarse hair, it could be anything but a pleasant experience. Now that it’s September, the days are getting noticeably shorter and the temperatures are coming down to a tolerable level. The time to get out and get on a horse – nude or otherwise – is getting short as well. And it’s almost time for clambake season. So get out there and make the best of the time we have left before the weather gets bad, find a resort that has a stable and go out and emulate Lady Godiva, wind in your hair and flowing all around your body and enjoy the last few weeks of summer.